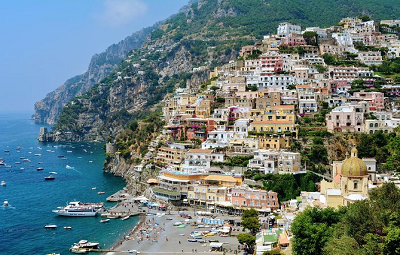 Amalfi is a graceful place: its cluster of white buildings gleams like a pearl in the strand of towns strung along the Amalfi Coast. It’s also one of the more level; it ambles up the hillside from the water rather than clinging vertically to it like some of the other famous destinations here, making it a bit easier to walk around.

Amalfi is one of the most historic towns along the Amalfi Coast, having had a glorious history as a maritime republic whose status joined the ranks of coastal powerhouses like Pisa, Venice and Genoa. It was a trade bridge between the Byzantine and western worlds for centuries. Its importance in that historic trading league is celebrated every year with the Regatta of the Four Ancient Maritime Republics, which takes place every June, alternating among each of the four cities to battle once again for seafaring bragging rights. It’s a spectacular event.